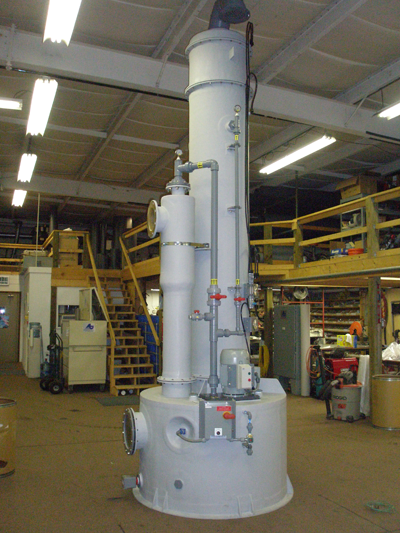 A steel mill located in a very northern climate uses large quantities of 36% by weight Hydrochloric Acid (HCl) for pickling, which emits vapor phase HCl, a colorless, corrosive and pungent gas. HCl has an Immediately Dangerous to Life and Health (IDLH) concentration of 50 ppmv with OSHA Permissible Exposure Limit (PEL) of 5 ppmv. HCl is also a Hazardous Air Pollutant (HAP), having highly regulated air emissions. The HCl solution is purchased by the truck load of 4500 gallons and stored in vented tanks. As a tank is being filled, the displaced HCl vapor is vented at an equivalent rate. When the truck empties, the compressed air used to transfer the HCl solution is released through the tank vent as a sudden high volume burst of air.

The concentration of HCl in the vented air is very high, being the same as its equilibrium vapor pressure of 18.7% by volume at 25 oC. Thus, a very high efficiency HCl scrubber was needed, which was to be installed outdoors, having to withstand a -40 oF wind chill factor. An added requirement was that all electrical components carry the CE Mark. AAT, Inc. was sought out for not only a quote to provide such an air scrubber, but also for determination of the two most important air scrubber design parameters – peak air flow rate (how big does it have to be?) and required removal efficiency (how well does it have to work?).

Advanced Air Technologies, Inc. (AAT) engineers were able to determine the peak air flow rate of 500 scfm, given a tanker truck pressure of 30 psig and an equivalent length of 2 in. hose of 100 ft. Design removal efficiency was determined based on achieving an HCl exhaust concentration of 50% of its IDLH. Required scrubbing efficiency would thus be 99.99%. Whereas water recirculation containing up to 20% by weight HCl can be used in 99% efficient HCl air scrubbers, the 99.99% efficiency would require the use of recirculating Sodium Hydroxide (NaOH) solution. At such a high concentration of HCl, special mist elimination techniques had to be employed to prevent HCl “fog” from exiting the air scrubber. This “fog” or aerosol forms spontaneously when high concentrations of HCl are introduced into a humid environment (such as an air scrubber). The NaOH solution would have to be charged into the air scrubber and batched due to the impossibility of keeping up with the end-of-fill burst of HCl using any kind of chemical feed system. The starting strength of NaOH was determined to be 20% by weight, since this is both commercially available and gives the highest utilization without crystallizing Sodium Chloride (NaCl) by-product. 20% NaOH also has the advantage of having a highly depressed freezing point of -20 oF.

An Apollo 500 air scrubber was chosen for this application due to it having a large recirculation tank (200 gallons) and two scrubbing stages – an ejector-venturi and packed tower. The ejector venturi part of the air scrubber removes 90% of the HCl and dissipates most of the Heat of Reaction generated when the HCl is neutralized by the NaOH, while also inducing air flow by creating a suction draft. The packed tower portion of the air scrubber, containing an extended 7 ft. tall packing bed and 2-stage high efficiency mist eliminator, achieves the remaining 99.9% removal of HCl. The air scrubber was constructed from FRP and had a double-wall, insulated tank with an electric heater and Mill & Chem Duty recirculation pump motor. The AAT Apollo 500 air scrubber system was installed in august 2010 and has been operating satisfactorily ever since.