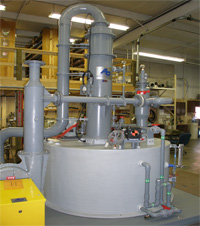 A southwestern oil refinery had a pair of spent acid tanks for holding Hydrocarbon-Sulfuric Acid mixtures unloaded from barges.  The head space of the tanks contained n-Propane and Sulfur Dioxide (SO2) blanketed with Nitrogen, which would get displaced with inflowing liquid during filling.  The displaced gases could not be directly vented to atmosphere due to limits on allowable Volatile Organic Carbon (VOC) and SO2 emissions, SO2 being one of the six “criteria pollutants” identified by U.S. EPA’s National Ambient Air Quality Standards (NAAQS).  The SO2 would have to be controlled in a wet scrubber, whereas the n-Propane, not treatable with wet scrubbing, would most feasibly be controlled by thermal oxidation.

To avoid SO2 corrosion in the oxidizer and the need for downstream cooling, the vent gas would first be scrubbed, then oxidized.  Variable flows and concentrations would characterize the scrubber gas feed stream.  In addition, subjecting the storage tanks to more than only a very slight vacuum would lead to excessive Nitrogen flows.

However, an ambient air bleed-in to minimize vacuum at low vent flows could not be used, since this would create a potentially explosive mixture of n-Propane and Oxygen.

In winter of 2008, an AAT Apollo 250 scrubber was installed due to its ability to handle the high SO2 concentration of 1% by volume (10,000 ppmv) and very high flow turn-down.  The Apollo scrubber consists of an ejector-venturi and packed column installed on a common recycle tank.  To facilitate absorption of the practically insoluble SO2, Sodium Hydroxide (NaOH) is used.  The ejector-venturi is the ‘peak shaver’, using a high liquid-to-gas ratio, while the packed column polishes the Nitrogen to

Coarse vacuum control on the storage tanks is provided by a gas recycle loop set to always provide at least 200 cfm of gas flow through the scrubber.  The recycle loop also dilutes high SO2 concentrations in the scrubber feed gas.  Fine vacuum control is accomplished using a pressure transmitter located at the scrubber inlet to vary the speed of a booster fan situated between the scrubber outlet and oxidizer inlet.  The scrubber was provided as a skid package consisting of the Apollo 250, booster fan, and interconnecting piping.  The customer is very satisfied with AAT’s solution to their process emission control challenge.