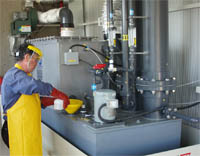 An overseas hospital was faced with the difficulty of economically meeting new air emission regulations concerning Ethylene Oxide gas, which was being used to sterilize medical equipment.  The regulation being adopted, known as T.A. Luft, is a European standard that is roughly ten times stricter than even the most stringent U.S. emission limits on Ethylene Oxide, such as those in force in California and Wisconsin.

T.A. Luft limits Ethylene Oxide emissions to a maximum discharge of 1.5 g/hour.  The two Getinge-Castle 4271 sterilizers each utilize an Ethylene Oxide charge of 1 kg, which is evacuated out of a chamber after the “soak” time has been completed.  Evacuation time is 15-minutes, so the amount of Ethylene Oxide that may be emitted over an evacuation cycle is only 0.375 g.  With both chambers being simultaneously evacuated, this translates into a required removal efficiency of 99.98%.

This level of performance is too great for wet chemical scrubbing.  Although thermal oxidation could be used to achieve this, safety issues and cost of fuel make this alternative unattractive.

For their long history and expertise in control of Ethylene Oxide emissions, AAT was contacted for a recommended solution to this challenging problem.  Their dry “scrubbing” patented technology was coupled with wet chemical scrubbing in a Safe CellTM Model 2002 packaged scrubber.  The unit had to be customized to meet the strict T.A. Luft regulation.

AAT was awarded the contract to supply this unit due to its relatively low capital and operating costs, as well as its safe and easy operation.  All major components, including electrical control panel, were fabricated, assembled and tested at AAT.  After installation, AAT service personnel performed start-up of the Safe CellTM system.

The scrubber was performance tested and shown to be in full compliance with the regulation.  This unit has met or exceeded every design requirement, and has been in service since November 2006.