For Total Abatement of Ethylene Oxide 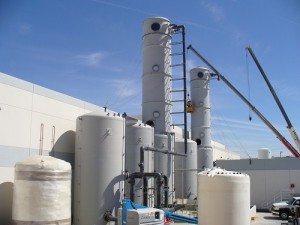 A commercial sterilization facility was planning expansion of their operation by adding a new sterilizer for disinfecting medical equipment using Ethylene Oxide gas.  Ethylene Oxide has been identified by U.S. EPA as a HAP (Hazardous Air Pollutant), and, like all HAPs, strict regulations are in place concerning its emissions.  So, a state-of-the-art air pollution control system would be required to treat the new sterilizer chamber evacuation emissions, as well as emissions from other sources such as aeration and back-venting.  The State of California requires a reduction of Ethylene Oxide emissions of 99.9%, more stringent than the Federal mandate of 99%.  Chamber evacuation emissions tend to be a low-volume gas stream with a high concentration of Ethylene Oxide, whereas the other sources tend to be higher-volume air streams with very low Ethylene Oxide concentrations.

The new sterilizer was to be identical to the existing sterilizer, both using a 14 lb. charge of Ethylene Oxide.  Emissions control on the existing sterilizer consisted of a Thermal Oxidizer.  There was much impetus to keep this technology in place, due to its familiarity.  Ultimately, however, the Thermal Oxidizer would be decommissioned due to its inherent explosion risk and high fuel cost, and both the existing and new sterilizer would be served by a new low-temperature pollution control system incorporating wet and dry scrubbing technologies.  Could this alternative system reliably achieve the same high removal efficiency as the proven and long-standing Thermal Oxidizer?

As one of the very few companies who specialize in Ethylene Oxide emissions control, AAT was sought out for a proposal to provide a system to meet the 99.9% reduction in Ethylene Oxide emissions from all sources.  Wet scrubbing using a special Plug Flow Reactor tank (PFR) followed by their unique dry “scrubber” was AAT’s approach to this demanding application.  The effectiveness of wet scrubbing relies heavily on high conversion of Ethylene Oxide to Ethylene Glycol, hence AAT’s unique PFR tank design, commonly known as Safe-CellTM I technology.  Their dry scrubber, known as the Safe-CellTM II, chemically bonds Ethylene Oxide to the surfaces of a dry reactant media.  This process, known as chemisorption, is extremely fast, effective, and irreversible.  Spent media is non-hazardous and may be disposed of in a regular municipal landfill.  The combination wet and dry system also allowed the higher-volume, low-concentration sources to be fed directly into the dry unit.  This had the advantage of maximizing wet scrubber removal efficiency while minimizing its size, and at the same time maximizing dry scrubber removal efficiency by ensuring high turbulence and no channeling of air through the bed.

AAT was awarded this order due to their system’s economical design, relatively low operating costs, safe and easy operation, and multi-pronged approach to address all the facility’s Ethylene Oxide sources.  Performance testing of the system demonstrated an overall Ethylene Oxide removal efficiency of 99.999%, far exceeding the requirement, as well as typical Thermal Oxidizer destruction efficiency.  The system has been is service since November of 2010 and has operated satisfactorily since day one.