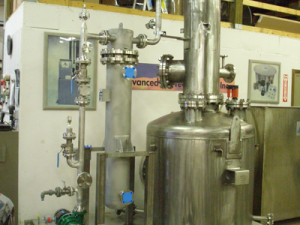 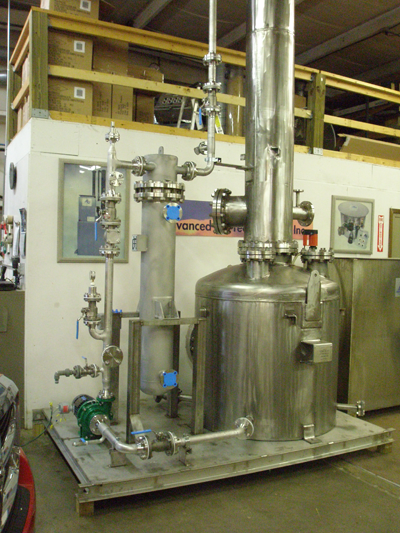 A large petrochemical plant uses Oleum, another name for fuming Sulfuric Acid, in a process for treating heavy hydrocarbons. Fuming Sulfuric Acid is made by pumping Sulfur Trioxide gas (SO3) into 98% Sulfuric Acid, kind of like “carbonation.” The SO3 scavenges the 2% water to form 100% Sulfuric Acid. If the acid is allowed to contact the atmosphere, the excess SO3 present will react with water vapor in the air to form sub-micron Sulfuric Acid aerosol, hence the term “fuming.” Oleum is added to the process vessel, which is blanketed with Nitrogen, and displaced Nitrogen and SO3 are vented to maintain a constant pressure of 15 psig within the vessel. If allowed to vent directly to atmosphere, most of the SO3 would convert to a dense, white, unsightly Sulfuric Acid plume. The rest would form acid rain much higher in the atmosphere. Fortunately, SO3 gas is a regulated air pollutant, as is stack opacity with a U.S. EPA limit of <20%. Undoubtedly, an engineered air scrubber system would be needed to effectively deal with the gas vented from this process.

Many aspects about this application are out of the ordinary, precluding the use of simplified air scrubber design models, such as those commonly used on air-water systems with dilute pollutant concentrations. First off, the scrubbing liquid cannot be water due to the aforementioned aerosol formation, which is subsequently very costly to remove. Rather, the liquid of choice is 93% Sulfuric Acid, which has very little water vapor pressure but enough liquid water to react with the absorbed SO3 to make more concentrated acid, ultimately 98%. Compared to water, this liquid is quite dense and viscous, and these properties significantly affect pressure drop and mass transfer within the air scrubber. The gas stream, about 20 mole% Nitrogen and 80 mole% SO3, is also much denser than air. In addition, the pollutant concentration is so high that total flow diminishes as the stream passes through the air scrubber, which further complicates hydraulic and mass transfer modeling. Lastly, a tremendous amount of heat is generated as the SO3 absorbs and reacts with the water, necessitating the use of a heat exchanger. Process aside, the air scrubber’s structural requirements included the ability to withstand possible exposure to 15 psig pressure, subjugating its design and fabrication to ASME Section VIII Division 1. This necessitated the use of metal alloy versus the more typical FRP construction.

AAT, Inc., well known as a custom air scrubber designer and manufacturer, was contacted for a preliminary design and quote to furnish an air scrubber system that would handle this unique application and all of its nuances. Alloy 20 was chosen as the material due to its superior resistance to all concentrations of Sulfuric Acid. AAT, Inc. was awarded the contract due to their outstanding customer service, knowledge and longevity of experience, and solid in-house engineering capabilities.

The system consisted of a recirculation tank with top-mounted packed column, end-suction horizontal centrifugal recirculation pump, vertical shell and tube heat exchanger, interconnecting piping, and Explosion Proof pump motor starter box, all factory installed on a common 304 Stainless Steel base. Installation took place in August 2010. The system has been in operation ever since, producing approximately 120 gallons per day of 98% Sulfuric

Acid for use elsewhere in the plant, as well as clean emissions with no sign of SO3 or acid aerosol. 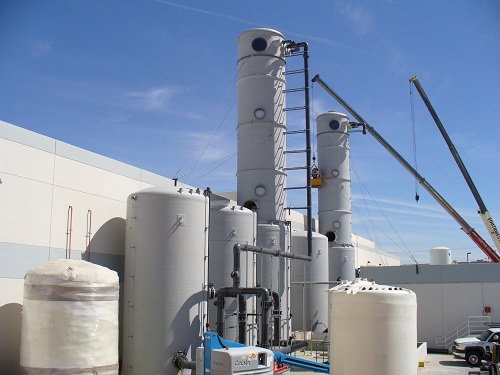